Just added to your cart

Water is the elixir of life. It's key to both performance and survival. While we all recognize the need for adequate hydration, most of us don’t drink enough water. Not only does dehydration rob performance, it’s a stealthy killer. Replacing body fluids is the single most important thing that we can do to manage heat stress and maximize performance. Adequate water intake reduces strain on the cardiovascular system and reduces heat-related stresses and injuries. 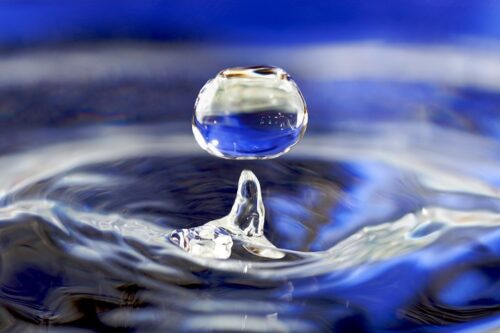 Water is the elixir of life. Without it life is impossible. Photo: José Manuel Suárez / Wikimedia Commons. Licensed under the Creative Commons Attribution 2.0 Generic license.[/caption] Dehydration leads to decreased balance, coordination, speed, strength and endurance. It degrades attention, reaction time, reasoning, mood and memory. It's also one of the most common causes of premature fatigue. By reducing the body's capacity for heat loss, dehydration often contributes to hyperthermia (elevated body temperature due to failed thermoregulation). Dehydration is the primary cause of heat illness. Dehydration will also increase the chances of going into severe shock if injured. And dehydration is completely preventable.

NEED FOR PROPER HYDRATION The need for proper hydration, especially during hot and humid conditions, has been emphasized by numerous organizations, including all of the branches of the US military, the American College of Sports Medicine (ASCM), the National Institute for Occupational Safety and Health (NIOSH), the Occupational Safety and Health Administration (OSHA), and the American Conference of Governmental Industrial Hygienists (ACGIH). According to studies, the frequency of accidents and injuries is higher in hot environments than in moderate environmental conditions. Even low levels of dehydration can significantly impair performance. Without adequate water intake, muscle endurance is reduced in less than one hour under hot and humid conditions. So too, is alertness and metal capacity. A person’s body water percentage depends on age, body structure and gender of the person. Body fat contains approximately 10 percent water. Muscle is approximately 75 percent water. In general, men should have a total body water percentage between 50 and 65 percent. The ideal range for women is between 45 and 60 percent. 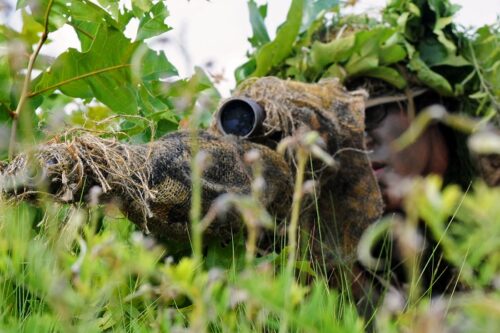 A sniper from the 4th Squadron, 73rd Cavalry Regiment, 4th Brigade Combat Team, 82nd Airborne Division peers through his scope to observe a target during the brigade's fires support coordination exercise, or FSCX, on Fort Bragg, NC. A sniper cannot afford dehydration. A mere 2% drop in body water will degrade fine motor skills and mental alertness. Photo: US Army photo by Sgt. Adonis Williams / Released.[/caption] The body’s water content must be kept within a relatively narrow range for proper functioning. A loss of just two percent of body weight due to dehydration will significantly reduce mental acuity and physical performance. This loss translates to approximately one liter in the average adult male. A five percent loss of body weight due to dehydration causes heat exhaustion. A seven to 10 percent loss of body weight due to dehydration can result in heat stroke and death. Studies show that athletes can lose two liters of water per hour while exercising. Even at rest in a temperate climate, the body loses a minimum of 1.4 liters of water every 24 hours through perspiration, from the lungs into the air as water vapor, and in the production of urine and feces to rid the body of waste products. The amount of water that's lost through perspiration is dependent on the level of physical activity and the external temperature and humidity. Just satisfying thirst requirements may not be sufficient to prevent the onset of dehydration, While thirst may encourage the consumption of enough water to prevent dehydration under moderate conditions, this mechanism isn't always a reliable gauge of water needs. The thirst mechanism may fail of because of high losses of water from the body. Once you feel thirsty, you are already dehydrated. Studies that were conducted by the Israelis and others, including the work of E. F. Adolph in 1947, reveal that in a desert climate, a person's thirst will only compel him or her to consume 2/3 of the amount of water that he or she needs to remain alert and active. The studies further reveal that individuals cannot be conditioned to operate effectively on a reduced water intake. 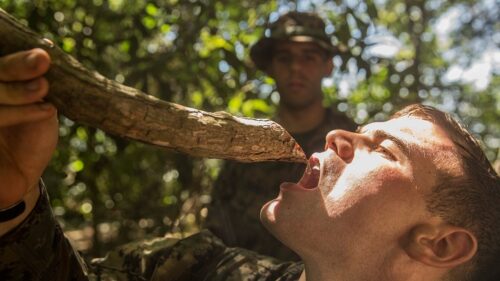 US Marine Cpl. Tyler Potter drinks fresh water from a tree branch in a jungle survival course during Malaysia-United States Amphibious Exercise 2015 in Tanduo, Malaysia. During the course, Marines learned from Malaysian soldiers how to find natural water sources to stay hydrated. Photo: US Marine Corps photo by Sgt. Emmanuel Ramos / Released.[/caption] The water that's required to prevent heat casualties can be significant. The amount of water necessary will vary based on metabolism, age, weight and physical condition, activity, weather conditions and altitude. Even in temperate conditions, the body may need one pint of water per hour or more during physical activity. Winter activities can also require an increase in water intake because of sweat and water loss from breathing cold, dry air. The risk of dehydration may actually increase when exercising or working in cold conditions because lower temperatures suppress thirst. If your kidney function is normal, your level of hydration will be indicated by the color of your urine, although some vitamins and supplements may cause a darkening of your urine that’s unrelated to dehydration. The kidneys, which filter waste, conserve water in response to dehydration and excrete a more concentrated urine that’s darker in color. The greater the dehydration more concentrated and darker the urine will be. Normal urine in a healthy, hydrated person should range from a pale straw color to transparent yellow. Colorless urine may be indicative of overhydration. Dark yellow is normal but indicative of mild dehydration. Amber or honey color is indicative of possible dehydration.

HYPONATREMIA Although prolonged sweating can result in a sufficient loss of electrolytes (salts) to cause medical problems, salt tablets are no longer recommended on a routine basis. A single salt tablet increases the body’s water requirements by approximately 0.5 liter. Normal salt loss is easily replaced by eating a balanced diet. However, additional salt should be added to the diet when engaging in prolonged exertion. Too much water can also create problems. The problem with drinking to completely prevent dehydration is that it tends to dilute the concentration of sodium and other electrolytes in the blood, especially during prolonged exercise of more than two hours. Although rare, water intoxication, which also known as water poisoning, hyperhydration, or water toxemia, is a potentially fatal disturbance in brain functions. It results when the normal balance of electrolytes in the body is pushed outside of safe limits. Hyponatremia occurs when the level of sodium in the blood is abnormally low. It's generally defined as a sodium concentration of less than 135 mEq/L, with severe hyponatremia being below 120 mEql/L. Mild symptoms include a decreased ability to think, headaches, nausea, and poor balance. Severe symptoms include confusion, seizures, and coma. Prior to 2003, the commonly accepted wisdom was that water and sports drinks were equally good choices for hydration during intense physical activity. Research on hyponatremia found this not to be the case. Sports drinks were found to do a better job than water in helping the body maintain an optimal fluid balance. Water is fine for short duration workouts in which sweat losses are minimal.

ELECTROLYTE REPLACEMENT For longer periods of exertion (>60 minutes) or other activities where sweat losses are substantial use a sports drink such as Gatorade®, POWERADE® Abbott Nutrition Pedialyte® or other electrolyte replacement product such as CLIF® BLOKS™ Energy Chews and CLIF Hydration Electrolyte Energy Mix. These products can be used to maintain hydration and electrolytes, as well as provide carbohydrates for the muscles. The composition of the replacement products should mimic the composition of the nutritional deficit caused by the activity. 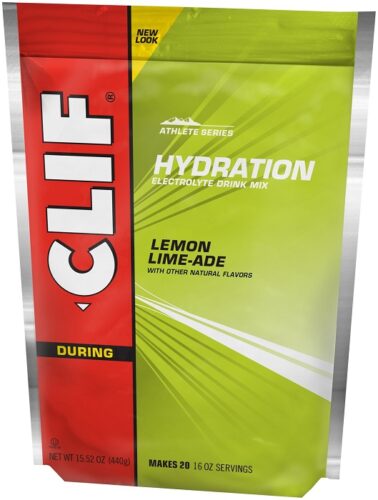 For longer periods of exertion or other activities where sweat losses are substantial use a sports drink or other electrolytic replacement product. CLIF Hydration Electrolyte Drink Mix is crafted to hydrate during activity with 4% carbohydrates and all 5 electrolytes to help your body absorb and retain fluid for effective hydration. Photo: CLIF Bar & Company.[/caption] When comparing sports drinks or electrolyte replacement products , it's important to realize that different types are available. There are three basic types: isotonic, hypotonic and hypertonic. They each play a different role in the body's hydration and recovery process Most commercially available sports drinks are Isotonic drinks. Isotonic drinks contain a concentration of electrolytes and carbohydrates similar to that of the human body and are quickly adsorbed, replacing anything that was lost in sweat. Hypotonic drinks contain a lower concentration of electrolytes and carbohydrates than the human body and are not as effective at replacing losses. Hypertonic drinks contain a higher concentration of electrolytes and carbohydrates than the human body, but they’re less easily digested and more slowly adsorbed. They’re most often used after heavy, intense exercise for recovery.

FOLLOWING A FEW HYDRATION BASICS Following a few basics will help ensure that one receives adequate hydration. Here are a few simple tips to prevent dehydration: 1. Always have adequate water available. 2. Always drink water before, during and after physical exertion to replace body fluids. 3. Anticipate conditions that will increase the need for water. These include elevated temperatures, humidity, protective clothing and the level of exertion. 4. Recognize that you are already dehydrated by the time that you are thirsty. Drink sufficient water to keep your urine copious and pale. 5. At least five to eight ounces of water should be consumed every 15 to 20 minutes to ensure proper hydration and maintain a safe body core temperature. It's easier for the body to handle small amounts of water spread out over the day, than larger amounts at one time. 6. Do not exceed 1.5 liters of water per hour. Daily fluid intake shouldn’t exceed 12 liters. 7. If water is in short supply, eat at a minimum to reduce water loss since water is required for digestion. Avoid fatty foods since they require more water for digestion. 8. Keep cool, clean water within easy reach at all times. Cool (60 to 70 degrees F) water is absorbed more quickly by the body than warm or very cold fluids.

THE MYTH OF CAFFEINE & DEHYDRATION Although it's still commonly recommended to avoid coffee (as well as, tea and soda) due to the belief that the caffeine has a diuretic effect, this is not backed by science. Although caffeine is a mild diuretic, recent studies have shown that moderate coffee consumption (three to four cups per day) is no more diuretic than water. When coffee is consumed in moderation, it can actually be an important source of fluid in the diet, as well as improving alertness. In fact, many electrolyte replacement products are now available with caffeine.

NO EXCUSES We cannot control the climatic conditions in which we may train or operate. We also cannot always control the amount of physical exertion that's required to accomplish the mission. However, we can control the replenishment of body water. Water may mean the difference between life and death and success or failure. Ensuring proper hydration is everyone’s responsibility.

written by Eugene Nielson on Spotterup.com